I had a fantastic evening at last night’s historic crime panel, the penultimate event of the flapulous Newcastle Noir 2019. Here I am in conversation with my fellow partners in crime. From left to right, Ann Landmann (moderator), Lesley Thomson, Nicola Ford, yours truly and Oscar de Muriel. 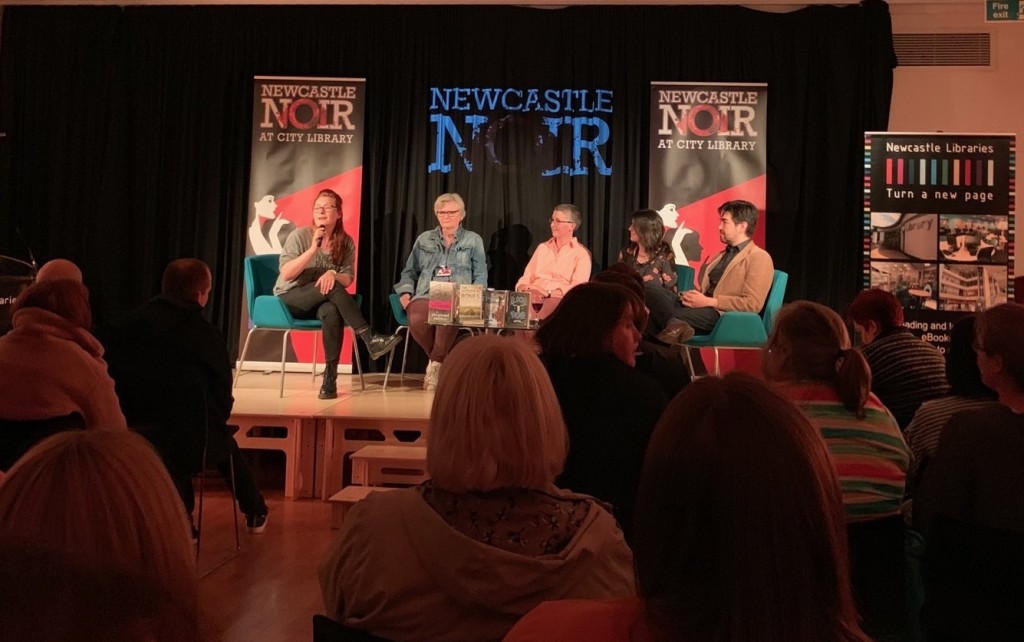 A lovely review of The Death Beat in the recent Historical Novel Review magazine.

As with the previous two novels, this was taut and entertaining. I also liked Poppy’s development from the earlier books. She’s always been torn between her upbringing as a Methodist minister’s daughter and her own desires as a career-minded young woman in the 1920s. Her inner conflict felt more pronounced to me in this book. Poppy has enlightened standards for how women should be treated that deviate quite a bit from her very traditional, conservative background, which at times cause her stress. This fits in well with the blossoming awareness about the conditions of immigrants and sweatshops and people forced into prostitution. While it was fun to see 1920s New York, I confess I missed London. In any case, it was an exciting, well written story and a good series addition. Recommended.

You can read the full review here.

Smith (The Jazz Files) returns to formidable and spunky Poppy Denby, arts and entertainment editor for the Daily Globe, in this inspirational whodunit set in post-WWI London. As Poppy goes from covering a Russian art exhibit to looking for a murderer and a missing Fabergé egg, she takes on charming and possibly nefarious Andrei Nogovski of the Russian embassy. With help from Rollo Rolandson, her boss; fellow reporter Ike Garfield; aunt and suffragette Dot Denby; and best friend Delilah Marconi, Poppy follows leads and discovers that people aren’t always what they seem. Interspersed with Poppy’s story are flashbacks that center on a young Russian aristocrat and the nanny who saves her from the fate of the rest of her family. The audience follows them as they cross the Russian landscape and wait to see how their story intersects with Poppy’s mystery. The complicated plot, involving a myriad of both White and Red Russians, is offset by the list of characters at the beginning, reminding readers of numerous important names and their allegiances. Smith weaves together a diverse cast, including both male and female characters in positions of power, and depicting a variety of ethnicities and abilities without resorting to stereotypes. Embark with upstanding, uplifting Poppy and her friends on a mystery involving jewel thieves, Russian royalty, murders, sword fights, car chases, and secret tunnel. Full review here.