This week I am back at my desk after a whirlwind week in London where I went to attend a gala awards dinner, hosted by the Crime Writers’ Association. The Jazz Files did not win the CWA Endeavour Historical Dagger award. It was pipped at the post by the very worthy Stasi Child by David Young. But what a fantastic night we had! A gang from my publishers’ Lion Hudson were there to cheer Poppy along and my husband, Rodney, came down from Newcastle with me. Here are some pics from the night. The one with my eyes closed is me waiting to hear the result … 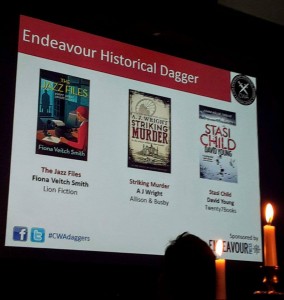 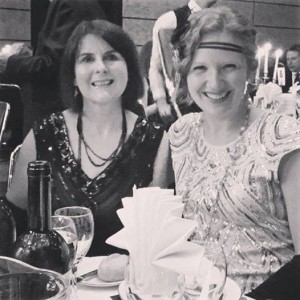 Me and editor Jessica Tinker in our flapulous 1920s gear. Photo courtesy of the very lovely Amy Boucher Pye from the Woman Alive Book Club who was also there to cheer us on. 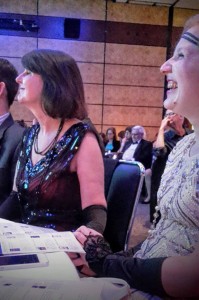 And the winner is … not me! 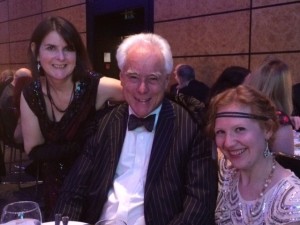 Pride in the pride. Me with Lion Fiction editors Tony Collins who first commissioned the Poppy Denby series, and current editor the flapulous Jessica Tinker 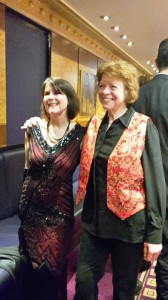 Me and fellow Lioness Elizabeth Flynn, author of the D.I. Costello crime series.

I am delighted to hear that The Jazz Files is on the short list for this year’s Crime Writers’ Association Endeavour Historical Dagger award. The Daggers are sort of the Baftas of British crime writing. The winner will be announced at a swanky dinner in London on 11 October. In the meantime Poppy Denby and I are toasting each other with pink champagne and wondering what to wear!

This is what the judging panel said about the book:

“This first entry in a new series featuring a female journalist in 1920s London is, like its heroine, buoyant and stylish but with a core of steel. Poppy Denby arrives in London from the north of England determined to make it as a journalist and gets her chance when she has to finish a murdered reporter’s investigation into the death of a suffragette. The Roaring Twenties are beautifully evoked.” - the CWA judging panel http://thecwa.co.uk/the-jazz-files/

If you haven’t already read The Jazz Files, why not remedy that now? The sequel, The Kill Fee, will be coming out on 16 September. You can click on the book covers on the right hand side of this page to buy them. Cheers!